In one of the scenes in L’Année dernière à Marienbad, the anonymous characters, the lover (Giorgio Albertazzi), the woman (Delphine Seyrig) and the husband (Sacha Pitoëff), are in a room with a group of people.  This short scene starts out with the image of a ceiling decoration; the lover’s voice-over seems to be describing its details.  The camera slowly tilts down to reveal the characters in the room as the sound of the woman’s laughter is heard.  The lover and the woman dominate the left side of the frame now and further back are two men dressed in suits.  The woman’s laughter stops just as the camera stops tilting down, making it unclear whether she has laughed at the words pronounced in the voice-over previously or something else that the man may have said, which was not audible to the audience.  Then the camera pans slightly to the right to include the husband in the right side of the frame, who gazes at them incessantly.  As the lover proposes to show the woman around the hotel and offers his hand to her, the husband’s threatening presence prevails, which neither of them seems to be unaware of. 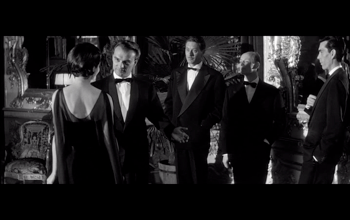 In the next shot, we see her taking his hand, unexpectedly responding not to his proposal to a promenade, but to a dance; this shot reveals that they are no longer in the same room, but in a dance hall with other dancing couples. 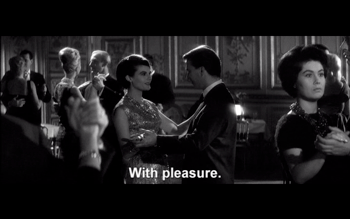 The tension that was present between the group of three men against the woman and the lover ceases to exist.  The characters have jumped to another time either before or after the talk they had in the previous shot, but definitely to a much more relaxed setting without the husband’s presence.  Characters, costumes and the location have all changed and there is no reference to the aforementioned shot except for the transitional gesture of taking the hand of the man as an act of consent by the woman.  The arrangement of these two shots as consecutive parts withholds information about time, space and causality in the narrative and blurs the boundaries of the scene’s beginning and ending.

In another one of the numerous scenes that contain such unusual transitions, the lover and the woman are initially at the hotel’s bar.  The slow tracking movement continues until the camera stops to frame the couple in a medium shot.  Meanwhile the woman listens as the man recollects what has taken place between them.

Segments from another time and space – presumably from the past – start to appear as single frames, rapidly inserted within while the camera angle at the bar keeps changing from left to right.  The man explains how he visited her one night in her bedroom last year.  As he continues his monologue, the frames momentarily reveal the woman in a white dress against a white background.  The whiteness of these single frames has a sudden and strong effect when contrasted to the dominance of black at the bar.  Later, what began as an abrupt intrusion starts to take over the scene.  As the bar shots lose their effectiveness and their duration shrinks, as in the previous example, the scene jumps to another location and continues in the woman’s bedroom.

A memory of last year?

Here, the only connecting element between the shots is the continuous voice-over of the man, trying to convince the woman to remember ‘last year’.  There are no indications that affirm or explain what belongs to present, past, remembrances or fantasies.  It appears as if the woman is trapped in his recollections. She does not have any control and she cannot interfere with what the man is constructing as their shared memory.  This scene offers in a microcosm a kind of model for the aesthetics of the whole film.  It is worked out in such a way that our indefinite orientation towards the narrative is kept constant.  It shows, visually and verbally, the tension between the man’s and the woman’s desires to unite and to separate.  Throughout the film, we see the man’s attempts to persuade the woman that they had an affair last year.  Just as the images seem to confirm the facts articulated through the man’s voice-over, they transform into something else and deny them.  Although this voice-over suggests the subjective viewpoint of the man, the non-matching images digress from this viewpoint.  The withholding of information leads to the impossibility of confidently explaining when, where and why something happens; this is one of the reasons why the narrative of Marienbad never unfolds into a logical or a chronological piece.